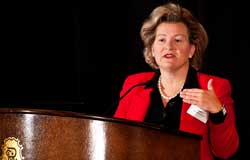 Joan Woodward
Travelers Companies, Inc.
Ms. Woodward has been Executive Vice President for Public Policy for the company since June 2008. She also leads The Travelers Institute, which was created in May 2009. She joined Travelers from Goldman, Sachs & Co., where she was the founding Executive Director of their Global Markets Institute. During her nine years at Goldman Sachs, Ms. Woodward also served as Vice President and Director of Washington Research for Goldman Sachs’ Global Investment Research.

Prior to joining Goldman Sachs, Ms. Woodward worked on Capitol Hill for 12 years, serving as Deputy Chief of Staff for the U.S. Senate Committee on Finance, as well as Senior Economist for the U.S. Senate Committee on Governmental Affairs and the U.S. House of Representatives Committee on the Budget. Ms. Woodward serves on the Board of Directors of the United States Chamber of Commerce, is a member of the President’s National Small and Medium Enterprise Export Council, and she is engaged with numerous community and charitable groups.

Ms. Woodward has bachelor’s degrees in Economics and Political Science and a master’s degree in Public Administration, all from the American University. She also studied at the University of London.