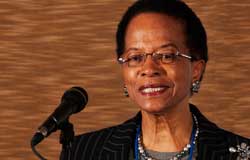 Dr. King currently serves on the boards of Exxon Mobil Corporation and Lenox Group Inc. She is a former member of the boards of directors of Wells Fargo and Company, Minnesota Mutual Insurance Companies and the H. B. Fuller Company. She has served on numerous board committees, including executive compensation, audit, governance and nominating, finance, and public issues and contributions committees. On the Exxon Mobil board she currently chairs the Public Issues and Contributions Committee. She is co-chair of the NACD 2009 Risk Governance Commission. She is recipient of the NACD 2004 Director of the Year Award. She is a current board member of the National Association of Corporate Directors (NACD) and a Trustee Emeritus of the University of Chicago. She is past board member of the Council on Foundations and the National Commission on National and Community Service

She has held careers in chemical research, academic administration, and philanthropy. She is former president and board chair of the General Mills Foundation and vice president of General Mills, Inc. Prior to joining General Mills, she was president of Metropolitan State University in the Twin Cities and as professor of chemistry and associate dean at York College of the City University of New York. Prior to these positions, she was a research chemist at the National Bureau of Standards in Washington, DC.

Dr. King is a graduate of Clark Atlanta University with a Bachelor of Science
degree in chemistry and mathematics. She holds master’s and doctorate degrees
in chemistry from the University of Chicago and the MBA from Columbia
University. She has received numerous civic and professional awards,
including fourteen honorary doctorate degrees.